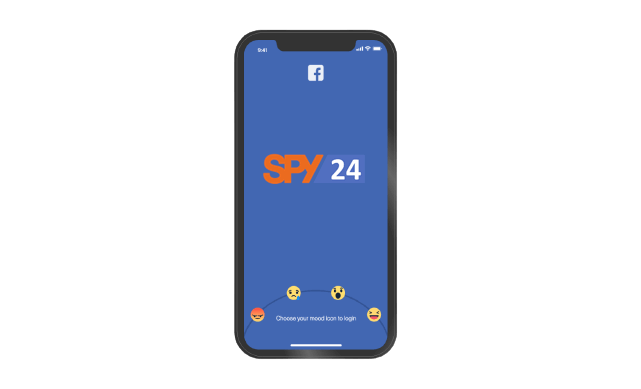 Watch the video and find out how you can monitor Facebook Messenger chats in just under 5 minutes.

Get an access to the Facebook conversations on a target phone. Keep track of your kids` phone to read their Facebook messages. Monitor your kids` Facebook messenger to be sure they don`t fool around during the school time.

View all pictures, videos and text messages sent and received via Facebook messenger of your kid remotely. Keep track of multimedia files of your child with Facebook spy feature to make sure they are not involved in sexting.

Modern parenting requires digital supervision. Facebook being one of the most popular social media for teens requires constant attention. By monitoring Facebook you protect your kid form cyberbullying and online predators. 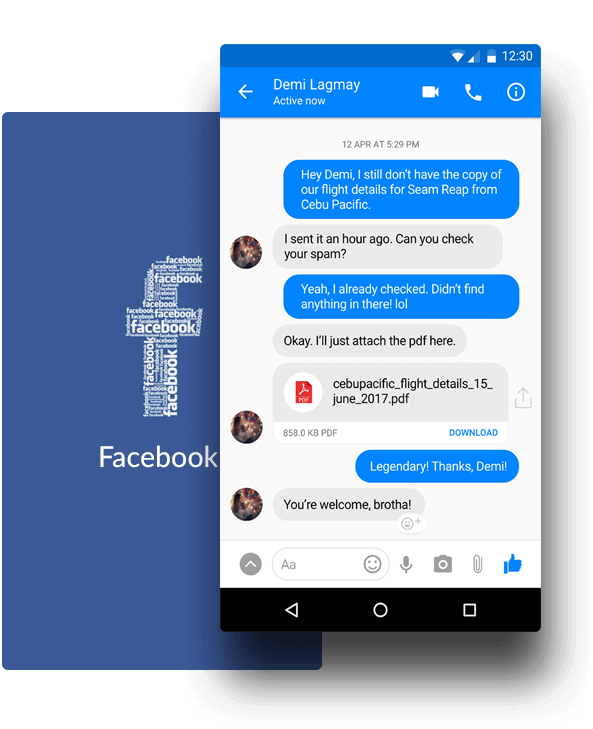 Not all Facebook Messenger spy apps are created equal

Spying Facebook messenger could reveal what spying on other messengers many not. Unlike other IMs, a much bigger population of users interact with strangers on Facebook. This is risky, especially when you have kids on social media. With SPY24, however, you can take care of that and prevent your kids from going into conversations with anonymous people.

And if you have a child or employee to monitor, make sure that you do spy on their Facebook messages, because of Facebook users’ notorious reputation for oversharing.

Find all your answers when you download SPY24 FB spy on a phone or tablet. With our spy app, you can track Facebook messages and can even access photos or videos downloaded from the Facebook Messenger app on your phone.

Our spy app for Facebook has extensive compatibility with every Android device. Be it a Gingerbread 4.0 tablet or a Nougat 7.0 smartphone, you can spy FB messenger with SPY24 pretty easily.

You can spy on Facebook Messenger on jailbroken iOS devices while the Facebook spying mechanism is similar to how you spy Fb Messenger on Android. You get to track Facebook messages, plus any multimedia saved from the app on the monitored device’s storage.

Using SPY24, you can export Facebook chats or other monitored data to your computer or any off-site location quite conveniently using your SPY24 web account.

How to spy on Facebook Messenger chat with SPY24?

SPY24 automatically uploads all Facebook Messenger chats to your web account, so all you need is a valid SPY24 subscription to get started.

Can I Monitor Facebook Messenger Chats Without Accessing The Target Phone?

SPY24 requires a one-time access to the target device to setup the application; after which, you can remotely spy on Facebook Messenger chats from anywhere using SPY24’s webpage-based control panel.

What are the prerequisites to spy on Facebook Messages?

To spy on Facebook Messages of your children or employees, you will need to setup SPY24 on the target cell phone or tablet. You will also need a working internet connection on the monitored device for the Facebook chats to upload on your web account.

Can I spy on Facebook chats when the target device isn’t connected to the internet?

SPY24 keeps working in the offline mode even when the monitored device isn’t connected to the internet. You can access those Facebook chats once the target device connects to the internet.

Which is the best app for parents to track Facebook messages?

SPY24 is a great way to track Facebook messages of your children. Our easy installation and 24/7 help from the support makes it very convenient to get started.

Check the details of each Facebook message, including the date, time, and recipient / sender.

Facebook Tracker as a Way to Spare Your Nerves

It’s no secret that Facebook is one of the most powerful social media networks on the planet. But how did we get here? When you think about what Facebook really is, it’s kind of alarming. A social network is actually a website that collects all kinds of personal information about its users. A lot of that information is provided by users themselves, like through uploaded pics, liked pages, comments in groups, and so on. But the majority is gathered by Facebook in ways we can’t even fathom.

But what if you want to know a little more about someone, like someone under your roof? What if you need to find out what your kids are up to on Facebook — who they’re talking to, what they’re saying, and so on? Turns out there’s an app for that.

With SPY24, you can find out what they’re up to on Facebook, including who they’re chatting with, what they’re doing, who’s in their network, and more. This tool is designed to give you a clear picture of their online life.

There are lots of reasons why someone might need to find out more about what’s going on in another person’s digital world. These include getting help with kidnapping, infidelity, runaway teens, and the leaking of crucial business information.

For many scenarios, there are specialized apps that can help. And in some cases, like preventing crimes or fighting terrorist activities, the police can intervene. But for the common everyday man, a Facebook spy app might be the best course of action. But remember, before turning to a solution that can help you monitor Facebook, you should always check the local laws in your area.

Great question. There are a number of Facebook apps that essentially spy on you. They know everything about you, from who your friends are to your personal interests to who you chat with regularly. That’s kind of the nature of Facebook. It’s all about personal information. But spying on a friend or relative’s Facebook activity via a Facebook tracker is a little more complicated.

Simply put, the use of a simple Facebook tracker isn’t illegal if it doesn’t violate the law and serve illegal purposes. But does snooping into someone else’s personal affairs violate the law? That’s for you to find out as laws vary across the planet. What we can tell you is that monitoring your child or monitoring someone else with their explicit consent is not considered illegal in many jurisdictions.

So, you’ve made the decision to finally use a Facebook spying app. The only thing left to do is figure out which app to use. Unfortunately, that’s not an easy task. The mark is crowded with a bunch of free spying apps. But we recommend you stay away from those. After all, when something is free, it’s most likely too good to be true.

Free Facebook spy apps are designed with one purpose in mind—to steal your personal information, like credit card numbers and passwords. That’s why it’s better to choose a paid app like the Facebook spy app developed by SPY24.

Full disclosure — our app isn’t free. But you get what you pay for. When you buy SPY24, you get an advanced product with bank-grade security built to keep your personal data protected. And SPY24 goes way beyond just Facebook spying. Our monitoring app gives you a full picture of their digital lives. This includes full access to their text messages and social media conversations, including Facebook chats. You also get things like GPS tracking, phone call monitoring, and the ability to see their saved pics and videos, plus those that they’ve sent and received.

The exact features you’ll get with SPY24 depends on the type of subscription you decide to go with. We recommend reviewing each feature, identifying what kind of phone you have, and taking some time to understand your exact needs before choosing on which subscription to go with.

If you can’t decide right off the bat, check out the SPY24 demo. You’ll see all the features in action before having to open your wallet. And you can also take advantage of our money-back guarantee, so if SPY24’s Facebook spy app doesn’t work to your liking, you can get your money back.

But consider yourself warned — with SPY24, you might discover things you wish you hadn’t. If you’re OK with that, you’re going to love what SPY24 can do.

It’s no secret that Facebook makes a boatload of money off its users through advertising alone. And they’re not exactly famous for respecting people’s privacy. But even so, users feel comfortable having secret conversations on Facebook, either through Facebook Messenger’s regular chat option or through Secret Conversations, a chat option that encrypts messages and erases them after a set period of time.

If you want to know what they’re saying and to whom they’re saying it, you need a Facebook spying app like SPY24. It lets you monitor Facebook messages from your phone remotely, so you can read their messages and see the pics and videos they’ve shared with their friends.

How to Spy on Facebook Messages Without Accessing Their Phone

Whatever the reason might be, a Facebook spy app can help. Just install the Facebook tracker on their phone and log in on yours. In seconds, you’ll be able to see their private conversations. It really is that simple.

Facebook seems like a pretty innocent platform, but the social nature of Facebook makes it easy for any two people to connect. And with Facebook Messenger, you can instantly strike up a conversation with a complete stranger. If they meet a new friend on Facebook, you never know what they’re going to share with them or what others are going to share.

Even though Facebook knows everything about its users, Facebook Messenger feels like a private, safe space where you can talk about anything. In fact, many people are more apt to have inappropriate conversations on Facebook than they are through text messages. Perhaps that’s because they believe text messages are easily intercepted and Facebook messages aren’t. In their world, spy Facebook apps just aren’t a thing. Whatever the reason, it doesn’t make a difference. With a Facebook spy chat messenger, you have the power to see everything — including evidence that they’ve been sexting.

Do They Use Other Chat Apps? This Facebook Tracker Does More Than You think.

We know that not everyone uses just one social media platform to communicate. In fact, they might chat with a handful of people on Facebook Messenger, use Snapchat to share pics with other friends, and use simple text message apps on occasion too. By getting a full-featured Facebook Messages tracking app, you’ll have the power to see what they’re up to wherever they chat. It’s a smart way to stay on top of whatever they’re doing.