How to Secretly Spy on Someone's Kik Messenger Account

Home - How to Secretly Spy on Someone's Kik Messenger Account

How to Secretly Spy on Someone's Kik Messenger Account 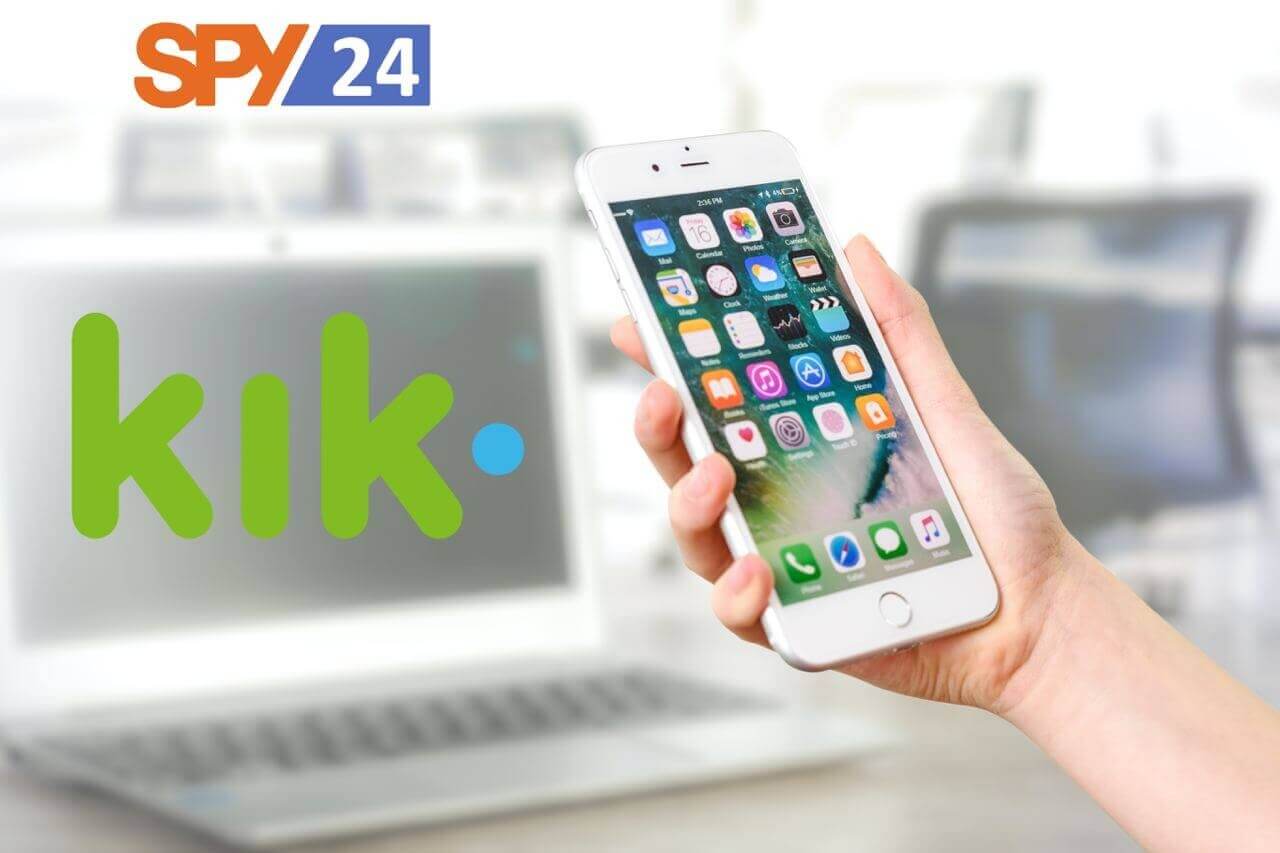 Do you want to know the quickest and most straightforward method of spying on someone's Kik messenger? The greatest approach to spy on someone using Kik Messenger without them knowing about it and without being detected is described in this blog post.

Kik is a popular messaging program that is used by adults, teenagers, and increasingly by children to remain in touch with their pals. Kik messenger software is popular because it allows anyone to register on it anonymously, as it does not demand a user's identity or contact number during the registration process. As a result, predators have an edge when they target children through the Kik communication app.

Because of the potential hazard, any suspicious activity can take place within this application. If you have a suspicion that your loved ones are concealing information from you and you want to spy on their Kik messaging, it is not that tough. You can monitor their activities with the use of cell phone spy software .

What is your motivation for wanting to spy on Kik Messenger?

In case you suspect that your children are concealing something from you or engaging in some harmful behaviors, or if you suspect that your loved ones are cheating on you, the best and most straightforward option to catch them is to quietly and remotely spy on their Kik messenger. You can unhide all of your loved ones' chats and discussions from their smartphones without them being aware of what you are doing. To spy on someone using Kik messenger, you will need to use the services of spying software that will allow you to monitor their chats, send and received photos, and other activities.

For catching someone cheating in the dark or spying on someone remotely, SPY24 is the best spying software available. Without disclosing your identity, SPY24 provides you with virtual access to the target mobile phone, allowing you to monitor all of their daily activities.

What is the best way to spy on Kik Messenger?

It is simple to spy on someone with the premier spy software SPY24, which is compatible with the Kik messaging. You can also read all of their chats and conversations, as well as all of the photos they have sent and received. SPY24 is the most eminent spying software on the market, and it operates in a concealed mode so that the person being monitored is unaware that they are being monitored. You may get this program online at a reasonable cost, and you can access their devices from the comfort of your own home without their knowledge.

You only need to download and install the application, after which you can access the control panel from which you can examine all shared photographs and conversations from your loved one's smartphone using your login credentials. With the membership of Kik spy messenger, you will receive a slew of additional features, like the ability to spy on their instant messaging conversations, GPS position, SMS monitoring, phonebook tracking, and many more. This software is the quickest and most convenient way to hack someone's mobile phone, and you can do so from the comfort of your own home. You will have complete access to their phone. So, download this software right now and begin spying on your significant other.

Is Kik a safe app to use? You might be surprised by the answer.

Don't engage in conversation with strangers. When we're young enough to speak, it's one of the first lessons we're taught, and it happens as soon as we can speak. Isn't that excellent counsel for the real world? So what is it about the virtual world that teens utterly ignore?

The fact that Kik, a smartphone messaging app with more than 300 million users globally, with more than half of them falling into the 13-to-24 age range, is so appealing is one of the main reasons for its popularity. Not only does Kik allow you to communicate with friends, but it also allows you to meet new people.

Scary? Yes, particularly in light of Kik's past (more on that soon). Teenagers, on the other hand, are completely enthralled. So, what can you do to keep your children safe from the risks of Kik? Does it make sense to be concerned that bogus profiles belonging to adults are flooding Kik for kids? And, more specifically, how secure is Kik? Continue reading to find out.

What is Kik and what distinguishes it from other social media platforms?

Kik is an instant messaging service that is particularly popular among teenagers. Friends can use cross-platform software to send photos, movies, and animated gifs with one another. Users of Kik can also participate in games, make new friends with similar interests, and do a variety of other things.

Kik is a popular messaging app among teenagers and adults alike. Kik now has a 4.0 rating on Google Play, based on roughly 2.5 million user reviews. The App Store also has a rating that is slightly higher than 4.

There is a strong correlation between the positive rating and the perceived privacy that Kik provides. When compared to other applications that require you to sign up using a phone number, Kik allows you to sign up with only your email address. In addition, because anyone may create a random email address using Google, Yahoo!, or other free services, teenagers are particularly fond of the practice.

Once you've created a Kik ID, you'll be able to start trading messages, images, videos, emojis, and other types of information with your friends.

Be anonymous — only an email address is required for registration.

Having one-on-one conversations with pals

Discuss topics with others and meet new people.

Is Kik a Social Media App for Teens? Or do teenagers simply have a preference for it?

Kik is a messaging app designed specifically for teenagers. According to Google Play, it is rated as Teen-Friendly. Furthermore, the app is clearly aimed towards teenagers, as seen by the use of youthful imagery on its website and in its marketing messages.

It is possible to use Kik from the age of 13 years old, but according to Kik's Guide for Parents, minors under the age of 18 years old must obtain permission from their parents or legal guardians before using the app.

Is Kik, on the other hand, safe for children? If your teen has received unwanted or inappropriate messages, Kik provides helpful advice on what to do. It also provides information on what you can do if your teen is being impersonated, as well as information on how to read your teen's Kik messages (which you can't do out of the box, but you can with a monitoring app).

So, how safe is Kik in actuality? If it appears that Kik is doing an excellent job of easing parents' concerns about their teenagers' use of the popular messaging app, that is because they are. The fact is that they don't have much of a choice, especially in light of all the turmoil that has surrounded the social media platform in recent years.

Kik makes headlines for all of the wrong reasons, according to the media.

In 2017, a Philadelphia Action News undercover reporter pretended to be a 16-year-old girl on the Kik instant chat service, which was used to communicate with her. And within minutes, the reporter had received pictures that were inappropriate and sexually graphic.

A Forbes investigation revealed proof of several child exploitation incidents employing Kik, which was released as part of the publication's own inquiry. We'll spare you the gory details, but here's what you need to know: at one point, Kik was rife with predators on the prowl, and it was a dangerous place to be. Just one easy Internet search for Kik predators will open your eyes to the perils of using the social media platform, with pages and pages of results that will make you feel the hair on the back of your neck stand up.

What was the extent of the damage? Kik, on the other hand, stated in September 2019 that it was ceasing operations. However, that declaration was subsequently overshadowed by another newsworthy occurrence that occurred a month later. In October 2019, Kik stated that the app had been purchased by MediaLab, a California-based company, ensuring that the Kik would continue to exist. The fact remains that many parents are concerned about Kik's security.

Is Kik a safe app to use? That is dependent on who you speak with. It's possible that it is from a technological standpoint. However, from a parental aspect, we will say no to your request. And the reason for this is as follows:

Kik can be used by anyone above the age of thirteen. And it gets worse from there. Kik accounts may be created with simply an email address (no phone number is required), making it simple for anyone under the age of 13 to pretend they are of legal age to use the program.

Users have the option of remaining entirely anonymous. On the surface, this appears to be a positive development. Isn't it true that your teen can remain anonymous as well? Maybe. However, it's likely that they're utilizing Kik to meet new individuals. While they may not be anonymous, the predator posing as a 14-year-old girl will take advantage of the fact that he is not being tracked down.

Anyone has the ability to contact your teen. Anyone, including folks who your teen has never met before, is acceptable. It is for this reason that Kik has been dubbed "a predator's paradise."

There isn't any form of protection in place. Despite the fact that you can report someone for sending improper messages and have them blocked as a result, there isn't much else you can do to protect your teenager. However, while Kik may deactivate the offender's account, it is relatively simple for them to re-register on the app — especially considering that only an email address is required to register.

How to Keep Your Teens Safe While Using Kik Instant Messenger

Request that they refrain from using Kik. We understand that saying it is easier than doing it. In the event that your teen's pals are using Kik, they will want to have it on their phone as well.

You should show them some real-life Kik horror stories that have made headlines over the last 5 or 6 years if they insist on using the app.

In addition, you might want to think about using a parental control monitoring app. SPY24 is an example of such a product. It allows you to examine their Kik messages from your phone without them being aware of what you're doing. Text messages and messages sent through other apps, such as Kik, are included in this category.

By putting SPY24 on your teen's phone, you will be able to remotely monitor all incoming and outgoing texts that are sent and received over Kik messenger. Additionally, you'll have the ability to see the time and date of each Kik message.

Another feature of SPY24 is the ability to access the photos and videos stored on their phone, study their browsing history, receive alerts when certain keywords are entered into a search, read their emails and call logs, and a plethora of other options. If you want to keep your children safe, this is an excellent strategy, especially in a world where Kik for kids is being abused by adults.