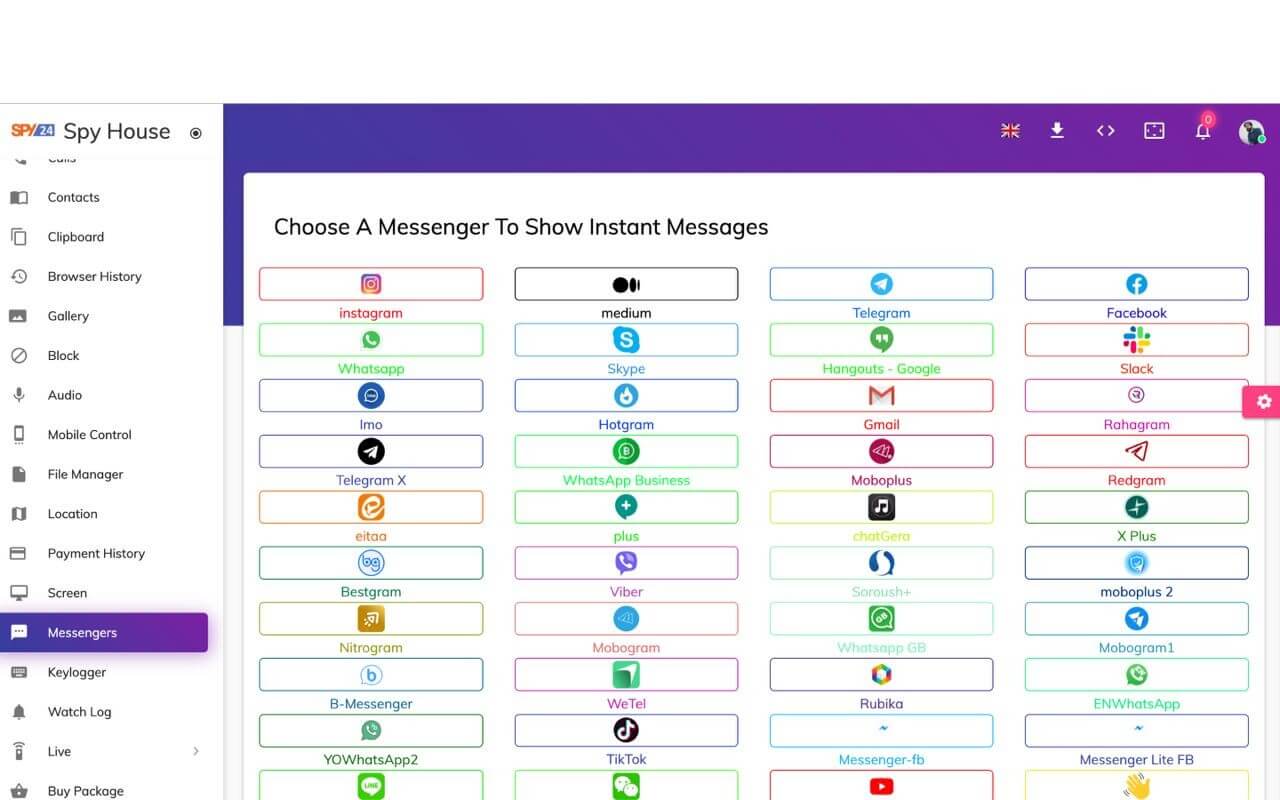 Learn how to spy on Facebook Messenger conversations for free. Additionally, in addition to a detailed instruction manual, it includes a list of five other apps for eavesdropping on Facebook talks.

"Is it possible for me to keep track on who my children are communicating with using their Messenger app?" I wonder. I've tried several times, but haven't been able to come up with a satisfactory answer. Could someone please explain to me how to spy on Facebook Messenger conversations for free?

This is a Quora question on Facebook Messenger tracking, which was posted by a worried parent who wanted to know more. It should come as no surprise that a huge number of other users are experiencing a similar situation when it comes to messaging tracking. There's a good chance that your children, spouse, or another loved one is secretly communicating with someone on Messenger while you're not looking. Fortunately, there is a multitude of tools available for spying on Facebook discussions. The steps in this post will bring you through the process of spying on Facebook Messenger conversations for free.

Check out SPY24.com if you're looking for a one-stop-shop for spying on someone's Facebook chat conversations. It is a complete device tracker with some of the most powerful surveillance capabilities available. It is trusted by millions of people all over the world and is accessible in a variety of languages.

What makes SPY24 the most effective Facebook Messenger spying application is as follows:

Despite the fact that there are numerous espionage programs available, not all of them will meet your requirements. The following are some of the most important reasons why SPY24 is such a highly recommended option: 1.

Due to the fact that SPY24 operates in an invisible mode, the targeted user will be completely unaware that they are being watched and monitored. You have the ability to access their Messenger data from a distance without alerting them.

There is no requirement for rooting or jailbreaking the device.

Subscriptions to SPY24 are available in a number of different options. On both vanilla and rooted/jailbroken devices, it performs admirably.

SPY24 is one of the most well-known and widely used spying software on the market, with millions of users already putting their trust in it. Your personal information will be kept fully confidential and will not be shared with any third-party application or service.

More than just a tracking program for Messenger

There are a number of extra features that make SPY24 far more than just a Facebook spy program, as well. Examples of capabilities include the ability to follow a device's real-time location, view their social media activity, block any apps, and receive daily activity reports, among many other things.

Spy on Facebook Messenger and other social media platforms.

With SPY24, you can keep track of anyone's Facebook conversations in real-time. The following features would be provided by the application:

You can view all of the messages that have been exchanged through the Messenger app (both sent and received).

Even if a message is later deleted from the app, a copy of the message is stored on SPY24 for future reference.

Additionally, all of the contact information, as well as the time stamp of the message, would be provided.

Messenger also allows you to see shared media in addition to chatting (such as downloaded images).

If you want to go beyond Facebook tracking, you can also employ the keylogger tool provided by SPY24. It keeps track of every keystroke that is entered into the device. As a result, whenever they connect to Facebook or Messenger, you will be able to view their account details. As an added bonus, it will allow you to see their communications even if they are later deleted. Under the Keylogger function, you may find a section for each program that is specifically dedicated to it.

How to Spy on Facebook Chat Using SPY24: What You Need to Know

One of the most appealing aspects of SPY24 is that it is extremely easy to use and does not necessitate any previous technical knowledge. The following are the procedures to follow in order to learn how to spy on Facebook Messenger conversations for free:

In the initial step, you'll need to create a SPY24 account.

To begin spying on someone's communications, you must first have a SPY24 account that is currently active. To log in or establish a new account, all you have to do is go to its website. You have the option of seeing a free demo or purchasing a subscription right away.

Download and install the tracker on your phone in the second step.

In order to begin monitoring a device, you'll need to first install the tracker on the device you'd like to monitor. It can be installed on a smartphone that is not rooted or on a smartphone that is rooted. To enable installation from unknown sources on a normal model phone, go to Settings > Security and check the box next to Allow installation from unknown sources. SPY24 can be loaded on a jailbroken device via a third-party installer such as Cydia, which is available for free.

If you want to root or jailbreak a gadget, all you have to do is get in touch with a SPY24 executive or use a third-party application. Install the program on your phone after it has been downloaded and grant it access to the appropriate permissions. You can gain access to your SPY24 account by logging in and verifying it with a one-time login code generated by the service.

Step 3: Begin keeping track of their Messenger discussions with them.

That is all there is to it! Now, all you have to do is go into SPY24's online Control Panel and you'll have access to all of your shared messages. Additionally, you will be able to use a variety of other SPY24 features from this location without being detected.

Take into consideration the following other Facebook spyware and Messenger trackers:

When it comes to spying on Facebook discussions, SPY24 is the favored solution. For those looking for an alternative option, these device trackers might also be tried out as a last resort.

This is a high-end gadget tracker with a profusion of features and functions. The only drawback is that the Facebook spy is rather expensive to use. Consequently, if you do not require access to the application's extensive features, you may want to consider using another spy program.

Using Messenger or any other social media tool, such as WhatsApp, Twitter, or Instagram, you will be able to view and listen to any conversations sent and received.

It is impossible for the targeted user to notice the presence of the application because it functions in stealth mode.

A range of other functions are also available, such as ambient listening, call recording , and device snapshot capture.

A number of situations will make use of the Truth Spy, which is one of the most established spying applications currently available. The main disadvantage is that it cannot function correctly unless the device has been rooted or jailbroken.

You have the ability to read any and all Facebook messages sent to you remotely, including those with timestamps and contact information.

Additional capabilities include spying on other social media apps as well as the phone's built-in messaging system.

In addition, you may track the user's whereabouts in real-time from your phone or computer using the Google Maps app.

If you want to understand how to spy on Facebook Messenger conversations, this is a little but dependable application that you can use for free. After the free trial period has expired, you will be required to purchase a premium subscription in order to continue enjoying its services.

Despite the fact that the application is running in the background, it will not notify the other user that you are gathering their information.

It is compatible with both iOS and Android smartphones, and it has Messenger tracking capabilities.

Not only can you read chats, but you can also examine any images, movies, or other media items or links that have been shared through the app.

Additionally, you have the ability to spy on other key social media apps such as Facebook, WhatsApp, Twitter, and others.

Spyera is yet another easy-to-use device tracker that is well worth your time. In spite of the fact that it lacks some advanced capabilities, this tool is more than capable of meeting your basic requirements for spying on Facebook chat.

You can view all of the texts that have been exchanged remotely through the device's UI.

Additional social media and instant messaging apps installed on the smartphone may also be monitored using this app if desired.

There will be no indication to the targeted user that their activity is being observed in the background.

Spyera Spy on Facebook Messenger is a spying application.

As the name implies, this is a specialist device tracker that is well recognized for its keylogger capabilities. You can immediately begin tracking every keystroke made on the device once the application has been launched, including Messenger chats and account information, once the program has been loaded.

You have the ability to remotely examine all Facebook messages, including their timestamps and sender's contact details.

Additionally, you get access to its keylogger and the ability to snoop on other popular social networking applications.

Everyone, this brings our conversation to a close. You will be able to effortlessly spy on Facebook discussions if you follow the instructions in this article, I am convinced. It is clear from the above description that SPY24 is a simple, yet effective, software solution for monitoring any popular social media application running on a mobile device. Many device tracking techniques are available, as is the ability to watch someone's Facebook interactions without being caught. Allow yourself to experiment and/or share this knowledge with others to illustrate how to spy on Facebook Messenger chats without paying a single penny for it.