Hangout Spy App to Track Text Chat & Conversations Monitor Text Chat and Shared Media on Hangout App Google Hangout is an Instant Messaging application allowing you to communicate with your significant ones through text messages, group chats, video conferences, and media sharing. SPY24 monitors all the conversations and media sharing that took place on the target device via the Hangout app.

Hangout Spy App to Track Text Chat & Conversations Monitor Text Chat and Shared Media on Hangout App Google Hangout is an Instant Messaging application allowing you to communicate with your significant ones through text messages, group chats, video conferences, and media sharing. SPY24 monitors all the conversations and media sharing that took place on the target device via the Hangout app. 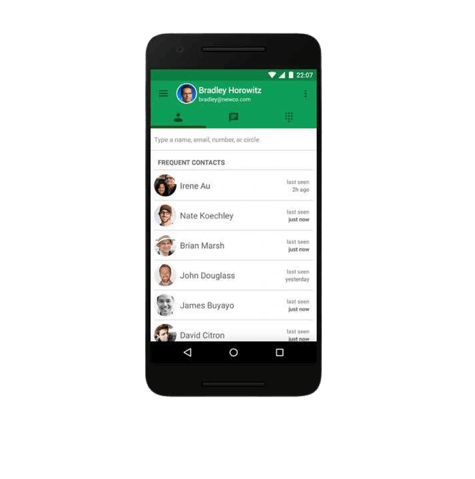 How to Monitor Hangouts On Android & IPhone Via SPY24?

Watch a tutorial to learn how SPY24 not just monitors Hangouts chats and group chats but also all shared photos on the target device.

You can use SPY24 to monitor Hangouts messages happening on your loved ones' iPhone or Android phone.

Spy on Google Hangouts messages, including emoticons and stickers

Download and store all captured information from your SPY24 dashboard 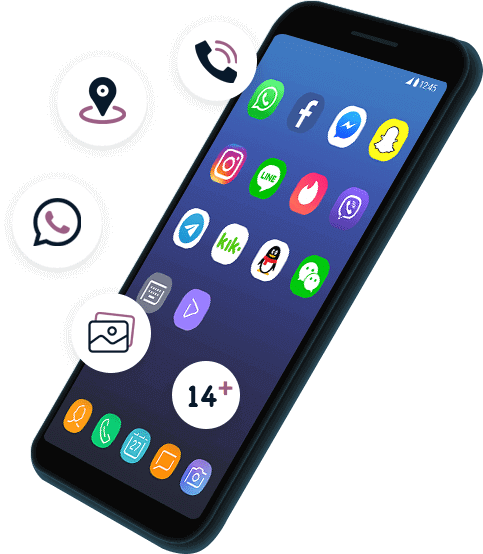 Hangouts is an instant messaging and video chat platform developed by Google. It allows users to engage in online conversations via text or video chat, and share photos or Emoji emoticons with up to 10 persons at the same time on smartphones, tablets and computers. Many secrets and potential dangers may also be hidden in Hangouts messages. There are lots of reasons why you want to Spy on your spouse, children or employees. As if you see their behavior is changing and most of the time they are engaged in their mobiles, it can be the case that your life partner can be the one who is cheating on you or your children can be engaged in various mischievous things which are not correct and your employees can be just passing their time in office. Now, we will share you how to spy someone’s Hangouts chat history. 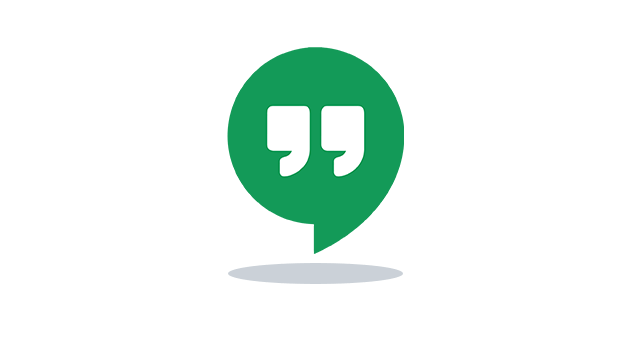 Hangouts Spy - Spying on Hangouts
A Hangouts spy is an application that allows you to monitor message logs from this program. Hangouts is a messenger service from the Internet giant Google so, it’s rather popular. Therefore, the chances are high that your kids and employees use it. The question is whether you should follow their communications through this app.

The answer to this is a resounding ‘yes’, especially where your children are concerned. Spying on Hangouts may sound rash, but it helps keep your kids safe. As a communication app, Hangouts is extremely versatile as it offers both text and video-chat options. The fact that it’s not as popular as WhatsApp or Facebook actually makes it more attractive to criminals who prey on children through the Internet. Parents often don’t think to install a Hangouts spy while they use special programs to keep an eye on other social apps, so predators may use it as their ‘access route’.

One in five children aged between 10 and 17 has experienced aggressive sexual solicitation when approached online. This statistic is not entirely accurate as only a fraction of these cases is reported, so the actual numbers are even more frightening.

Installing SPY24, a program that will monitor all social media apps on your child’s smartphone can help you make sure your precious little one is protected against these atrocities. This app does not only spy on Hangouts but also allows you to track the gadget’s location. Therefore, you will always know where your children are and will be able to come to their aid should this ever be necessary.

As a business owner, you can benefit from installing SPY24 on the corporate smartphones. This will allow you to ensure there are no inappropriate communications between your employees and that none of them misuse the gadget.

Note that SPY24 is not a phone hack, but you need to warn any adults before installing in on their phones.

Hangouts is a registered trademark of Google Inc. To download Hangouts you can go to the Hangouts's Google Play page.

How can I spy on Google Hangouts?

Can Google Hangouts be monitored?

Our Google Hangouts spy app feature lets you remotely monitor Google Hangouts messages on your target's phone. This is a convenient tool to keep you updated on what is being discussed by your employees and children. ... You have the option to monitor Hangouts discreetly if you wish.

Can someone hack your phone through Hangouts?

Hackers have infiltrated Android phones through 'Hangouts' app and other video messages. ... Well, they won't enjoy this video. Hackers created a short video, inserted malware into it, and sent it to thousands and potentially millions of phones.

Can someone hack my phone and read my texts?

Spy apps Such apps can be used to remotely view text messages, emails, internet history, and photos; log phone calls and GPS locations; some may even hijack the phone's mic to record conversations made in person. Basically, almost anything a hacker could possibly want to do with your phone, these apps would allow.

If Google’s a part of their world, make sure SPY24 is a part of yours. It’s the best way to see what they’re saying on Google Hangouts so you can keep them safe from unwanted communication, harassment, or worse.

How to Track Someone on Hangouts

Is Google a part of your world? Then there’s a good chance your kids use Google Hangouts. And even if you aren’t an Android kind of family, your kids and teens might still love using the Google chat app, especially if their friends use it. So if you’re looking for info on how to track someone on Hangouts, we don’t blame you.

The good news? You’ve definitely come to the right place. With the right Google Hangouts tracking solution, you’ll be better equipped to keep tabs on your kids and know what’s going on in their life. And that’s the key to keeping them safe and secure in this crazy, crazy world.

Believe it or not, more people than you think. From kids to teens, from full-time employees to contractors, Google Hangouts has become an integral chat tool in many people’s lives. That’s why it’s crucial that your parental monitoring solution is capable of monitoring chats on the popular Google app.

See every message sent and received in Google Hangouts

Did you know that Google Hangouts can be used as the main messaging app for instant messages and text messages, including SMS and MMS? It’s true, and that’s why we made sure our Hangouts spy app lets you see every message that was sent and received. You’ll never miss a message, including messages that might have been deleted.

See their group chats and conversations too

Not all conversations happen between just two people. The wonderful thing about Google Hangouts is that it lets multiple people participate in the conversation at once. When you know how to track someone on Hangouts using , you’ll also be able to see the conversations they have with others. And not just your child’s messages. We’re talking about every message sent and received by every single participant in that group chat.

Conversations are key to understanding what’s going on in their digital world and keeping them safe. But it doesn’t end there. You also want to know who they’re talking to beyond the chats you can see. That’s why the  Hangouts tracking solution includes key pieces of additional data, including their contact list (names and photos), plus the exact time each conversation took place.

It might be a little weird to think that stickers can tell you a lot about what’s going on in a person’s world. But the truth is people use stickers to communicate with each other and let the person on the other end of the conversation know how they’re feeling or what they’re thinking. When you have a Google Hangouts tracker solution that shows you the stickers they use, you have a powerful tool that’s really a window into their emotions. Perhaps they’re feeling down. Or maybe they want to communicate feelings of love (or lust). Whatever the case might be, you’ll be able to see their stickers. And that can be insanely powerful.

See their emojis and understand how they’re feeling

While stickers are useful in communicating feelings, emojis are more widely used. Oftentimes, emojis are inserted directly within written conversation. That’s why you should make sure you have a Hangouts tracking solution that can actually display emojis. The last thing you want to do is pay for a Hangouts spy app, only to find out that it can only reveal the text they typed, and not emojis.

View the GIFs in their Hangouts conversations

Teens are especially prone to using GIFs when communicating with friends on Hangouts. That’s why you should make sure that the app you’re using can actually show the GIFs they’ve sent and received. While GIFs are often used to convey something funny, they can also be used to convey something that your child might be embarrassed for you to see. But you’re wondering how to monitor Hangouts, not to embarrass them, but rather to protect them. That’s why finding an app that supports GIF is crucial.

Browse their map location in Hangouts

Google Hangouts lets users share their location on a map. When you have a Google Hangouts tracking solution that can display that, you’ve definitely scored. Yes,  also has a location tracker baked right in. But being able to see the locations your child sent and received within Hangouts can provide you with even more insight into their world — and ultimately help you keep them safe.

If you’re concerned about cyberbullying, you need a Hangouts tracking solution in your corner. While Google Hangouts can be used to make plans and chat with friends, children and teens can often find themselves being part of a chat where cyberbullying or abusive chat is taking place.

When you buy , you won’t just be able to tracking Hangouts convos. You’ll also be able to see what they’re sending and receiving in other chat apps. The parental control monitoring solution is built to work with all sorts of chat apps, so that no matter where they’re chatting, you’ll be armed with everything you need to keep them safe and take action if you notice something just isn’t as it should be. Whether you decided to go with  or not, make sure that the Hangouts tracker you pick works with other chat apps too.