Without Installing on the Target Phone, Get a Free SMS Tracker 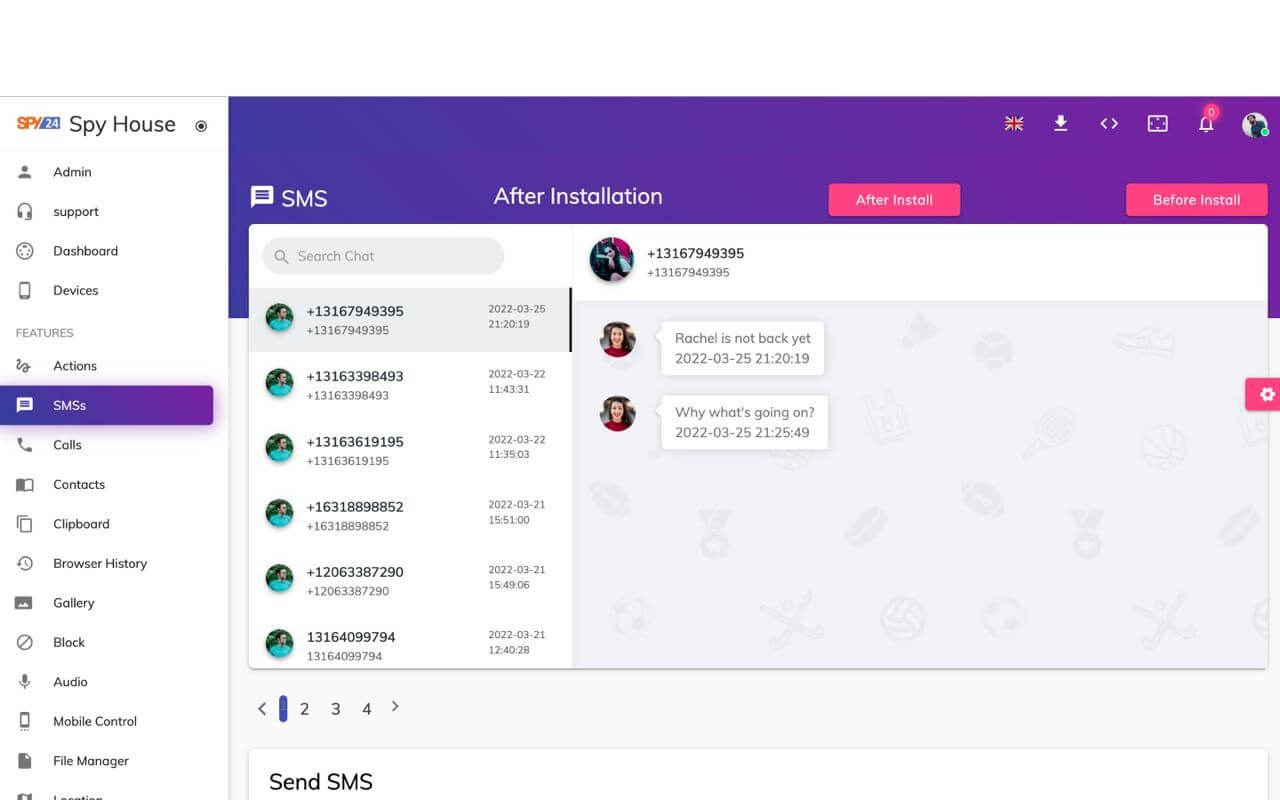 Is it possible to spy on someone's text messages without having physical access to the device in which they are being monitored? In search of a reliable free SMS tracker that does not necessitate the installation of any software on the target phone

In this case, the user is asking a question on an internet forum about the possibility of SMS eavesdropping without having access to the device. In spite of the fact that this may seem surprising, you may use a free SMS tracker to gain access to any phone's sent and received texts. Nothing more than gaining access to the device and installing a device tracker on it at least once is required to complete this task. Despite the fact that it may appear strange, installing a free SMS tracker is simple and can be done without any technical experience. In this essay, I'll go over eleven trackers that are similar to them in greater detail than they did.

When tracking SMS, is it possible to do so without having access to the target phone?

Many people believe it is impossible to use a free SMS tracker without installing anything on the target phone. This is not the case. To be perfectly honest, in order to view the messages on the device, you must access them at least once before they become visible. You must first install a device tracker on the phone and provide it permission to access the texts it contains before you can proceed. That is all there is to it! Once the tracker has been installed, you will be able to access the tracker's dashboard from anywhere in the world and see all of the messages that have been exchanged.

Please keep in mind that, regardless of which free SMS tracker you select, you must access the device at least once every day to ensure that it is functioning properly. Certain applications, on the other hand, can spy on a device even if they do not have access to it. In this case, you will be required to log in to their iCloud account, which is utilized to sync their messages with their devices.

To save time and effort, choose one of these two options and then choose your next free SMS tracker without installing software on the target phone from the list provided.

This is one of the most dependable and user-friendly solutions for keeping track of messages sent and received on any type of device or platform. It is compatible with both iOS and Android cellphones, and it is capable of extracting a variety of information from the messages that are transmitted over the phone.

You get access to all of your exchanged (both sent and received) communications on the device at any time, from anywhere.

It is still possible to view deleted messages via the Control Panel of SPY24, even if they have been deleted subsequently.

In addition, you can find out who the conversation was with and when it was exchanged with them.

You may check the legitimacy of each communication by looking at the timestamp (which includes the date and time it was saved).

Additionally, you can monitor iMessages as well as conversations on social media platforms such as WhatsApp, WeChat, Messenger, Snapchat, and Instagram, among others.

The following is yet another device tracker and keylogger program that you may wish to investigate. It has been designed to be compatible with the vast majority of common cellphones and to have an easy-to-use interface.

It will generate a thread out of all of the messages and chats that have been exchanged.

The messages would also contain the sender's contact information as well as the time stamp of the communications.

Furthermore, you may track messages that have been placed on other popular apps.

As an added bonus, the gadget comes with a built-in keylogger that allows you to record all keystrokes that are made on the device.

This is yet another free SMS tracker that does not require the target phone to be installed to function properly. However, only the demo edition is available for free; after that, you will be required to purchase a paid subscription.

It allows for the viewing of text messages sent and received on a phone from a distance.

It is not necessary to root or jailbreak a phone in order to extract its SMS.

A timestamp for the message and additional information about the sender would be included in the message.

It is compatible with the vast majority of popular Android and iOS smartphones.

KidsGuard Pro is a software program that protects children from harm.

ClevGuard's KidsGuard Pro is a reputable free SMS tracker that works on both iOS and Android devices. It is available for download from the company's website. This app can be used on any smartphone because it does not require jailbreak or root access to function.

A thorough device tracking feature is included, which allows for the monitoring of all messages sent through the device.

You can read the messages from anywhere in the world by logging into the web-based dashboard (even if they are deleted later on).

In addition, it allows for real-time data synchronization (if the internet is working on the device).

Every day, tens of thousands of parents around the world rely on The Truth Spy, and you can give this free SMS tracker a go yourself. Following the completion of the free trial period, you will have the option to purchase the full subscription.

Threads will have a complete record of all communications that have taken place between devices (with respect to different contacts).

It will also include any messages that have been erased from the device.

You may also keep track of conversations that are taking place on other social media and instant messaging apps.

This app works flawlessly on the most common Android and iOS mobile devices available.

When looking for an Android SMS tracker that is both dependable and free, Hoverwatch is a good option to consider. You should be informed, however, that the app has discontinued support for iOS and will no longer function on an iPhone or iPad.

It has the capability of recording all phone calls and allowing you to monitor them remotely.

Additionally, it makes it easier to keep track of communications sent via social networking and instant messaging apps.

Running in an unnoticed mode, this application is hence undetectable by its intended target user.

It is compatible with the Android, Windows, and Mac operating systems.

When it comes to devise tracking and monitoring, Flexispy is a well-known name, and its free SMS tracker will not let you down. Although the app would be slightly more expensive than its competitors, it would still be worth it.

Regardless of whether or not the message is saved, it is capable of recording any communications that take place on the device.

Additionally, you may record any phone calls that are made on the smartphone and listen in on conversations that are taken on nearby.

Additionally, it has a highly effective keylogger.

There is no need to root or jailbreak your device.

MobiStealth is a lightweight and secure solution that can be used as a free SMS tracker without requiring the target phone to be installed with any additional software. A number of other device monitoring functions are also included in the package.

You have the ability to get the whole SMS history of the device, including contact information and timestamps.

Additionally, there is an option to run the software in an inconspicuous manner (invisible mode).

Additionally, you can keep track of where the gadget is now located.

Spyera is a feature-rich phone tracker that is compatible with virtually all Android and iOS handsets on the market. If you like, you can also use it on a Mac or a Windows computer.

It has the capability of remotely monitoring all messages transmitted and received on the device through a web-based interface.

Aside from that, it has the capability of spying on other devices as well as on all major social networking apps.

It operates in a covert manner.

There is a ten-day money-back guarantee included.

This is one of the most sophisticated options available for tracking free SMS messages that do not require the installation of any software on the recipient's phone. However, in order to take advantage of the service's premium features, you would need to pay for it.

You may see all of the messages that have been sent and received on the device, as well as the sender's and receiver's contact information and timestamps.

You can track down conversations even after they have been deleted with the help of a strong keylogger included in the package.

Supports the most widely used iOS and Android devices on the market.

Why is SPY24 considered to be the best SMS tracker available?

In comparison to the other choices listed above, SPY24 is without a doubt the best free SMS tracker for iOS and Android smartphones. The following are some of the reasons why you should select this SMS tracker over others.

- The inability to see

What is more important is that SPY24 runs in stealth mode, which ensures that the targeted user is completely unaware that they are being monitored.

When it comes to security and dependability, SPY24 is unsurpassed. It will never reveal the location of your phone or any of your personal information to a third party. You can use it without worrying about causing damage to the equipment.

There is no requirement for jailbreak or rooting the device.

There are versions of the software available for both conventional and jailbroken/rooted phones. As a result, even if your smartphone has not been jailbroken or rooted, SPY24 will allow you to view the messages it is sending and receiving.

There's a lot more to it than just a simple SMS tracker application.

As a comprehensive gadget tracker, it contains a host of other features in addition to its core functionality. It is possible, for example, to keep track of the device's real-time location and social media activity as well as its saved photographs, videos, documents, contacts, and call logs, among other things.

That's all there is to it! The information in this article will enable you to select the best free SMS tracker that does not require installation on the target phone after reading it. SPY24 is a highly recommended option because it is a fantastic tracker that also comes with a free demo edition to try out. The gadget tracker is already in use by well-known professionals, and it requires no prior technological understanding to operate. You can use it without difficulty, or you may get in touch with its customer service for assistance.